70% of Alzheimer’s Patients Are Women 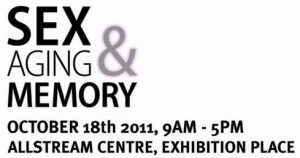 Little is known about sex differences and the aging process, such as why 70% of all new Alzheimer’s patients are women but animal research still focuses on males….because female hormones, even in rats, are considered too complex to deal with.  Learn more in this short video.

I’m the honorary chair of the Sex, Aging, and Memory conference which is meant to raise awareness and funds to promote women’s brain research.

You can learn more about women’s brain health at the Sex, Aging and Memory health conference to be held on Tuesday, October 18th. Follow Women of Baycrest or hashtag #samconf on Twitter.