TORONTO — For all the advancements in medical technology, Canada is mired in ancient times when it comes to simple data sharing among health-care professionals, the president of the Canadian Medical Association said Tuesday. Establishing electronic medical records is the one of the best things Canada could do to improve its health-care system, Dr. John Haggie told a Toronto audience at The Economic Club of Canada’s annual health care outlook panel. “Our current technology with health records is no different from the scrolls that Hippocrates used,” said Haggie. “Technology exists out there and it’s not being made relevant to the people who see patients.” Haggie was backed up by Dr. Robert Bell, president and CEO of the University Health Network, which includes three hospitals in downtown Toronto. 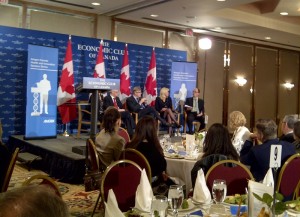 Reforming our primary-care system — the front-line family doctors, nurses and other health-care professionals who are the first point of contact with patients — would be a huge step in the right direction, Bell said. And part of reforming primary care includes creating access to electronic health records. Implementing new technologies comes at a cost, but Bell argued that new technologies pay off. Bell used the example of molecular imaging, which will, he predicted, be used to screen patients for colon cancer by 2025. At about $150 a test, this molecular imaging will eliminate the need for the costly and uncomfortable colonoscopies now used to screen patients at a high risk of developing colon cancer. “Technology will actually make the system far more cost-effective, far more patient-friendly and provide us with a lot better chance to cure diseases,” Bell said.

Improving health care will also require a paradigm shift from a system that treats the sick, to a patient-centred system that focuses on prevention, said panelist Dianne Carmichael, president of Best Doctors Canada, a company that helps patients navigate the health-care system. But finding the political will to get there is another matter, she said. “If we continue along the path that we’ve gone historically, where we allow the politics of change to prevent us from moving forward with a transformation, if we do that, we will continue with the status quo that, by 2025, looks rather bleak,” Carmichael said. Carmichael said that the private sector has a role to play. CEOs are influential and can help communicate the need for change in the health-care system, she said. Tom Blackwell, a health reporter for the National Post, agreed that a political will is one of the greatest barriers to overcome if Canada wants a better health-care system by 2025. “The first step is to have a change in the political culture around health care, where politicians are willing to consider different ideas and incorporate some of the concepts that business people use in their operations,” Blackwell said. © 2011 iPolitics Inc.